Banaras Hindu University(BHU) formerly Central Hindu College, is a collegiate central university located in Varanasi, Uttar Pradesh. It was established in 1916 by Madan Mohan Malaviya, the Maharaj of Darbhanga Rameshwar Singh, Sundarlal, and British theosophist and home rule league founder Annie Besant with over 30,000 students residing on the campus. It is the largest residential university in Asia.

The idea of Hindu University was made known to the world by Pandit Madan Malaviya at a meeting held in 1904 at Varanasi under the Presidentship of his highness maharaja Sir Prabhu Narayana Singh of Varanasi. A prospect of the University was published and circulated in October 1905 and it was communicated in a select meeting held in the town hall of Varanasi on the 31st December 1905 at which a handful of educationalists and representatives of the Hindu Community of almost every territory of India were present. The Congress of Hindu Religion(Sanatan Dharma Mahasabha ), under the Presidency of Jagadguru Shri Sankaracharya of Govardhan math also considered and approved the scheme in Jan 1906. At the sacred Sangam (meeting place of three rivers Ganga, Yamuna, and Saraswati at Prayag

Pandit Madan Malaviyajee took a vow to dedicate his life to the establishment of the proposed University. Pandit Madan Mohan Malaviya realized that it was too a great project to be taken up along with his profession, gave up his lucrative practice at the bar, and launched his mission in Jan 1911.

The Great education enterprises were launched in full swing in July 1911.

An appeal for 1 crore of rupees for the establishment of the University was made to the public by Pandit Madan Mohan Malaviya on July 15, 1911. Deputations were organized for raising

funds and they visited Calcutta and several places in the United Provinces, Bihar, and Punjab. Promises of donation of nearly 30 Lakhs rupees were secured from the public in the course of a few months. The Maharaja of Darbhanga joined the movement actively and besides promising a handsome donation of 50 Lakhs of rupees, he led the deputation to many Indian states and several other districts of geographic regions of Punjab, the United Provinces (now UP), Bombay (now Maharashtra and Gujarat) to raise funds.

A society beneath the name, The Hindu University, was presently fashioned and registered in December 1911. The movement for collection at this stage went into full swing. All the ruling Princes, The poor and The rich, peasants and princes contributed their mite towards the funds of the University. Contributions came from all over the nation and people in the farthest corners of the country for the development of the University.

B.H.U was finally established in 1916, the first University in India that was the result of a personal individual’s efforts. The muse for the elemental field of the University was laid by Lord Hardinge, after that the Viceroy of India, on Vasant Panchami, 4 February 1916. To promote the University’s expansion, Malaviyajee invited eminent guest speakers like as

Mahatma Gandhi, Jagdish Chandra Satyendra N.Bose, C.V. Raman, Prafulla Chandra Roy, the surface to air missile Sam Higginbottom, Patron saint Geddes, and Annie Besant to produce a series of what are now called “The University Extension Lectures” between 5-8 February 1916. Gandhi’s lecture on the event was his first public address in India. Sunderlal was appointed the primary vice-chancellor and the university began its academic session within the same month with categories an into control at the Central Hindu School in Kamachha space, while the campus was Built over 1300 acres (5.3 square km ) on the southern edge of Varanasi, near the bank of the river Ganges, on the land donated by the Kashi Naresh on the fringes of the city. The Nizam of Hyderabad and Berar, Sir Osman Ali khan, also made a donation of 1 Lakh rupee for the University.

The history behind BHU’s Campus facilities

The campus has over 60 hostels offering residential accommodations for over 12,000 students. On-Campus, housing is additionally on market to a majority of the full-time faculty. The main entrance gate and boundary wall: It was made on the donation made by Maharaja of Balrampur, Maharaja Pateshwari Prasad Singh.

It is the main Library on campus and houses over 1.3 million volumes as of 2011. This Library was completed in 1941, its construction was financed by Maharaja Sayajirao Gaekwad III of Baroda. Along with the main library, there are three institute libraries, eight faculty libraries, and over 25 departmental libraries available for pupils and staff.

S.S.Hospital stands as a teaching hospital for the institute of medical sciences. Established in 1926 with 96 beds, it’s since been expanded to over 900 beds and is that the largest tertiary referral hospital within the region. 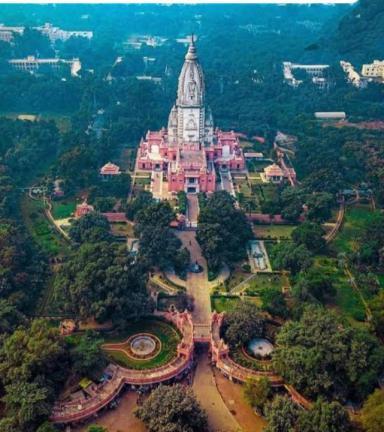 It is the most well-known landmark, located in the center of the Campus. The foundation for this 252 feet (77m) high complex of seven temples was laid in March 1931 and took almost three decades to complete.

It is an art and archaeological museum on the Campus. It was established in Jan 1920, its first chairman was Nobel laureate, Rabindranath Tagore, with his nephew Abanindranath Tagore as a vice-chairman. The depository expanded and gained prominence with the efforts of Rai Krishnadasa.

Rajiv Gandhi South Campus is located in Barkachha in Mirzapur district about 60km south of the main campus. Spread over 2700 acres (11square km ), it was transferred as a lease in perpetuity to BHU by the Bharat Mandal Trust in 1979. South campus hosts the Krishi Vigyan Kendra (Agricultural science centre) with a focus on research in Agricultural techniques, agroforestry, and biodiversity appropriate to the Vindhya Range Region.

Banaras Hindu University is a fully residential University with a total of 62 hostels – 41 hostels for males and 21 hostels for female candidates. There are four separate hostels for International Students. Hostels are named after many historically important figures such as Raja Baldev Das Jugal Kishore Birla, Lal Bahadur Shastri, Rani Lakshmibai, and M.Visvessvaraya.One of the oldest hostels in the Birla hostel constructed in 1921 by the industrialist Shri Jugal Kishore Birla in memory of his father Baldev Das Birla. It is the biggest hostel and for administrative purposes, the Birla hostel was divided into 3 sub hostels – Birla A, Birla B, Birla C, a few decades back. Undergraduate students are accommodated in Birla A, whereas Birla B is supposed for Analysis students(Research Scholars) and Birla C for postgraduate students.

Banaras Hindu University is organized into 6 institutes and 14 faculties(streams ). The institute’s area unit is administratively autonomous with its budget, management, and educational bodies.

BHU conducts national level undergraduate test (UET) and Postgraduate test (PET) usually during May-June for admission for which registrations begin usually in February -March. Admissions to B.Tech/B.Pharm., M.Tech/M. Pharm is done through JEE and GATE respectively. Admission to MBA and MBA-IB did through IIM-CAT score and also through a separate entrance test BHU-MBA. Admission in PhD is through NET or CRET Test. In IMS through PMT exam. For admission in BFA, candidates area unit needed and known as to present two sensible practical exams after they have secured a good rank in objectives exams. Foreign students are admitted through the application submitted to the Indian mission in her/his country by her/his country’s mission in India.

There is also an intro university fest “Spandan ” where students represent their factual/institute in various art competitions such as literature(poems, debates, essay writing), Painting, sketches, singing, dancing, drama, vocal music, and mimicry. This festival is held every year after Vasant Panchami in February or March.

BHU medal is given to meritorious students of BHU who secure the first position in their respective departments or faculties.

Bhu Post is an online open platform for student based in Banaras Hindu University. It’s a collaborative platform where you can gain as well as share information about topics you are really curious and passionate about!
Contact us: bhupost@gmail.com
© bhupost